I tried pong. I lasted about five seconds: I was useless at it. You had to pay for each game. What annoyed me was that I was being penalised for being rubbish at it – I couldn’t practice to get any better because I wasn’t good enough to get any bonuses. I tried asteroids and breakout and  space invaders.  I was useless at them all.  The first negative I found– games are (or can be) expensive. 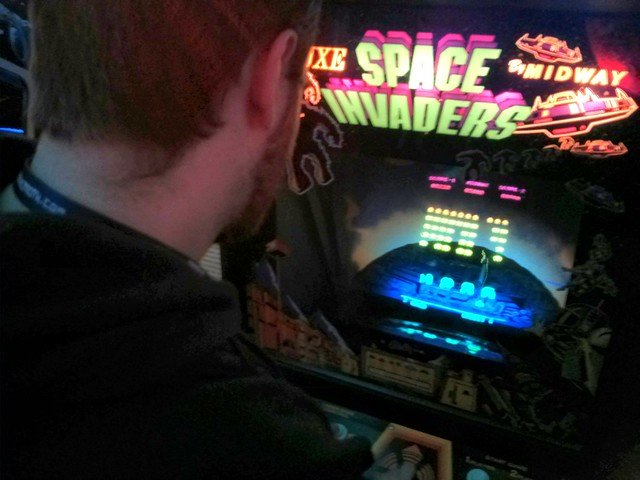 I never really got on with such games

Shareware was the start of my connection with computer games (or video games – I never worked out which is the correct term). Often games were given away on magazine covers – in the form of a floppy disk, and if they would run on my 386 dx25 we would try them. I tried Tetris, and got better at that because I didn’t have to pay to practice. I found it addictive and it was soon pointed out that I got quite angry and annoyed when interrupted especially if anyone tried to get me to give up playing it. I found my second negative there – so games do affect us, they can make us angry and aggressive, but I stress the word CAN.

For years this was my favourite game

Somehow I ended up with Transport Tycoon – Oh, how I love that game! A train-set: one that I can lay out as I wish, with proper signals and trains, and stations and… oh …all sorts. I had the train-set I always wanted as a girl and never got, probably because I was a girl. I played the first shareware version for years: it was limited to a year’s virtual play and only trains, but that was fine by me. My son bought me the boxed set full game for my birthday or mother’s day one year and it was one of his best gifts ever. Now I could run buses and lorries and trams. I quickly discovered that you could scupper your opponent by driving a worthless train across their road and stopping it on a level crossing (and yet I hate game cheats)! I played this constantly, rarely trying anything else to be honest and this is possibly why I believed so much utter tosh about computer games – they were all violent, sexist, racist and wholly undesirable for children. Transport Tycoon was off course an exception as it was for adults and was a sim. After a time I started to collect various Sim games.

By now I had seen a familiar pattern occurring in the marriages and relationships of friends that I found worrying. I was seeing, all around me, men and boys spending more and more time on the computer game and leaving their wives/girlfriends/partners/siblings to do the housework. Now this is no new phenomenon – some men were very good at avoiding their share of housework, and always will be and the truth is that if they were not playing games they would be doing something else to escape housework. Those men would be out at the pub, or even for the older men in the shed.

(I just want to point out that this is not all men, OK)

But for a young woman who is looking at games with a negative eye this was another reason why I disapproved of them.
The problems still existed in my head – video (computer) games are:

I now think that I was wrong about much of this. I am now, I suppose, a gamer. My views are now much different, but I wanted to explain where I had come from and how far I have travelled.